The South Indian River Water Control District, known as SIRWCD, provides water management and road maintenance, as well as related services for Jupiter Farms, Palm Beach Country Estates, Egret Landing and the Jupiter Commerce Park in northern Palm Beach County, Florida. The District covers over 12,500 acres or about 20 square miles, with 189 miles of paved and unpaved roads, 60 miles of canals, and 376 miles of swales. The District was created in 1923 by an act of the Florida Legislature and is one of over 1,600 special districts in the state.

As far as the SIRWCD drainage system is concerned, pretty much everything north of 175th ends up in Canal 2 and goes through the lake in Cypress Creek South and out to the river, Canal 3 handles most between 165 and 174th and empties into the canal around Picnic Island in into Canal 14 (which is essentially the channelized part of the Loxahatchee River from about Picnic Island upstream) in Riverbend Park, Canals 4 and 5 empty into Canal 14. Canals 6 and 7 (the southern perimeter canal) combine near the SE corner of the Farms and enter Canal 14 together. The historical drainage of the area would likely had water shedding more to the NE into the river but the canal system shifts water to the East into Canal 14 and then to the Loxahatchee as a general rule.

SIRWCD Manager of Operations, Mike Dillon, has asked that we share the following memo from 2007 regarding the pumping of water and reminds residents that the information and rules are as true now as there were then.  Please familiarize yourself with them. 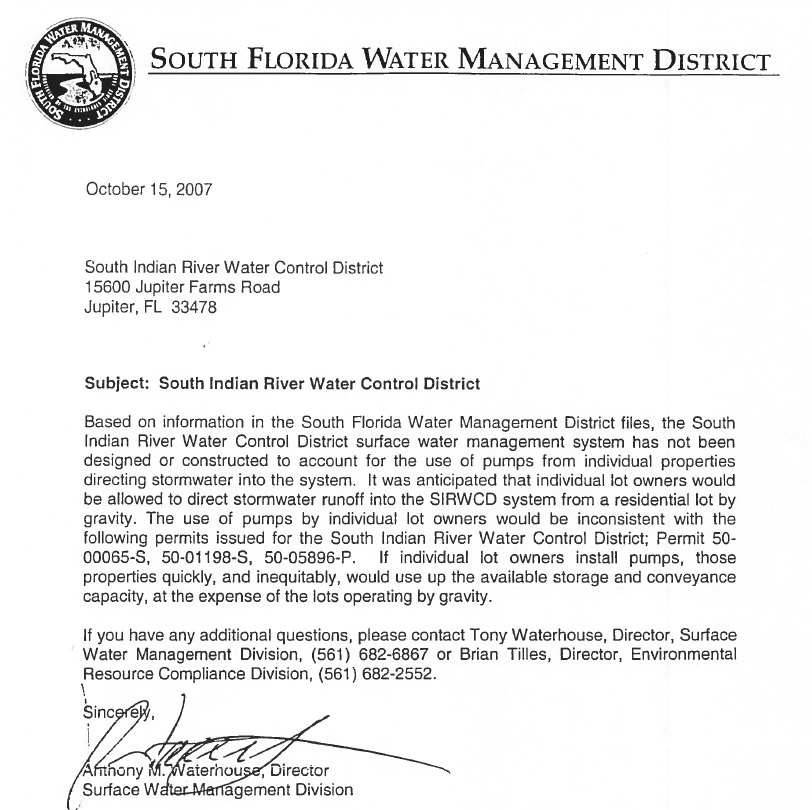